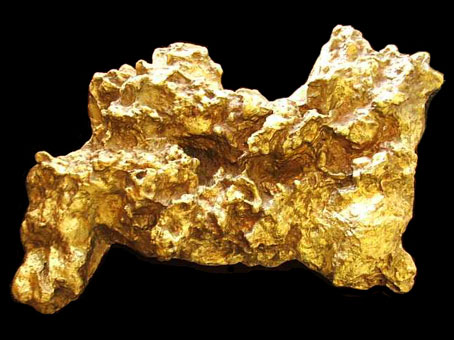 Welcome Stranger - found this day 146 years ago.  Now wouldn't that get your heart racing?  Throw the smoking remains of your GPX 5000 on the dirt and jump for joy!

its just unimaginable a 71 kg solid nugget at ya feet, what would you do if you were a few km from camp? leave it there to get the car and hope no one spied you or try to drag it back. not many could carry it out.
_________________
keep safe out there
Martin

Drop ya detector and gear on the ground.  I doubt you would ever need it again unless you are looking for the rest of the Nugget family.  They are nice people, you should meet them sometime

I would love to see a tonne of gold in a cube in the bush with cameras watching would be funny to see how people would try to move it, since it would only be just over 30cm3 small enough to pick up but to heavy to do anything.

How would you move it?

only 30cm3 for a tonne of gold, didnt realize that Koeh, cheers.
ok, but its a 40 deg day and your miles from camp, try to hump it back and you will die of dehydration, Tom's poor postie bike is up to its handlebars deep in bog with a blown rear tyre and you have heard another detector close by from the interference on your 5k

these are all possibilities today, you can see why some of the big ones got cut up in situ and in those days there were many many dodgy fellas standing shoulder to shoulder.  you wouldn't do that today because of unique nugget value so whats the backup plan now... re bury it?
ever watched hypothetical?
_________________
keep safe out there
Martin

Yep, try and bury it, build a fire over the top of it and throw in lots of old cans, alfoil and any other metal crap you have lying about and hope it's still there when you get back with the hiab.

Imagine what that little baby would be worth!

Imagine if you hit it with your pick….

Stingray wrote:Sorry Koeh, it's not 30cm3, that's just a half kilo odd tiddler! 1 cm3 weighs 19.32 g. A solid cube of gold with 15.5 cm long sides would weigh about 72 kg. I reckon it would be damn hard to pick up, but impossible to just leave there!

Imagine what that little baby would be worth!

Imagine if you hit it with your pick….

Koeh, no argument from me, and I'd be more than happy to struggle with my 2300 ouncer!

Of course that's if we weren't sharing. When I go prospecting with a mate we invariably share. So if that was the case with you, then trust me, we'd get that big sucker into the car someway or another. Even if we had to dig a big hole next to it, back the car into the hole and lever the slug into the back...

hi there, anyone know where such a large piece came from compared to reef gold deposits.

KennyD wrote:hi there, anyone know where such a large piece came from compared to reef gold deposits.

1889, "BOBBY DAZZLER" 30ml SW of Marble Bar in Shark's Gully, Goonan River was found by Archie Clive, the gross weight 487oz., with 413oz. of solid gold
1899, "GENERAL GORDON" Ten years after, another from same claim. the finders being William and A.McPhee. It contained 331oz. of gold.

1890, "LITTLE "HERO" or "PANTOMIME" Two miles south of this famous spot lies Pantomime Gully, where Doyle, discovered the nugget. In the rough it turned the scales at 333oz.

1895, "JOKER"slug of 303oz. Black Flag at the Devon Consols mine of practically pure gold knocked out of a reef 6ft. below the surface.

1897, "MONARCH" nugget, by P. Martin in Wiluna, was located immediately alongside the reef from which it had been shed in the mass of gold and quartz weighed about 30lb. It contained 249oz. of gold.

1897 "GOLDEN MILE", Kalgoorlie
70lb of pure gold one piece alone weighing 60 oz., were taken out of a pocket. This was spongy gold, named from its similarity to vegetable sponge, and is the product of oxidisation of gold tellu-rides being found in the surface ores of those Kalgoorle mines which have yielded telluride at depth.

1931, "GOLDEN EAGLE" 1135oz (35kg) Found at Larkinville, near Kalgoorlie. (believed to be cast from stolen gold from a local mine, The 'Golden Eagle' nugget was discovered at Larkinville by the 17-year-old son of Mr Jim Larcombe, on Thursday 15th January 1931. Weighing 1,135 oz 15 dwt, and measuring 26½ x 11½ x 2½ inches (675 x 290 x 64 mm), the nugget was the largest discovered in Western Australia at the time and created a national sensation during the great depression.
The block of ground on which the nugget was discovered was previously held by Mr Bill Sheehan, who had abandoned it. The nugget was found in a hole in the road leading to Mr Mickey Laskin's camp, having been driven over by local people for months with no idea of what lay beneath the surface. When young Larcombe unearthed the nugget it was reported that 'he uttered such a joyous yell that diggers quickly ran to the spot' where they 'saw the lad staggering with a massive slab of gold in his arms.' As there were no scales available capable of handling it, someone thought of the idea of balancing the nugget on a pole against a bag of sugar and when this was done, the gold easily swung the 60-lb bag in the air giving the crowd a rough idea of its weight.
Mr Larcombe was born at Kadina in 1887 and had arrived at Coolgardie at the age of nine. He had spent his adult life prospecting on various goldfields and was the President of the Coolgardie Prospectors' and Leaseholders' Association at the time of the find. His son had only been working with him at Larkinville for five weeks at the time of the find and had almost abandoned the ground before a 70-ounce slug of gold was found on an adjoining block the previous Friday. This had heartened the Larcombes encouraging them to work their own ground with renewed vigour.
The nugget was sold to the Western Australian Government after Mr Larcombe had refused a private offer of £6000 for the nugget.

1980, “YELLOW ROSE OF TEXAS“ BONDIES FAKE NUGGET 400oz (12.4 kg) Was fabricated in a garage by members of a Perth family and sold as a genuine nugget in 1980. The buyer, who paid $350 000, was prominent businessman Alan Bond. After the fake was revealed, and the culprits charged in 1991, Mr Bond sold the ‘nugget’ to the Perth Mint, where it was melted down.

1995, KING OF THE WEST NUGGET 819oz (25.5 kg) received world attention when it was exported to the USA for auction without the required permit under federal legislation protecting cultural heritage. The nugget was renamed the Normandy nugget after it was purchased by Normandy Mining Ltd upon its return to Australia.

2012, "JUMBO" BOOMERANG (Tow Bar Pic Nugget) 20 to 30kg apparently found illegally near Cashmans Prospect nr Kalgoorlie, east of Ora Banda. There were reports it was uncovered by a bulldozer but others say it was revealed after someone kicked some dirt. A number of people have come forward, claiming to have seen the 'nugget' which they say is made from aluminium or lead and spray painted gold. Pictures went viral in the internet and Prospecting Shops got inundated with questions.

Now I know where nuggie dreamer comes from

Flying kiwi wrote:Now I know where nuggie dreamer comes from

One out there with your name on it deet

thanks for the great info NuggieDreamer, my dad use to say i was a bugger on shoes, looks like it will be worth getting back to kicking some dirt. looking forward to finding one !