got this sent to me last night, confirmed at 1.1 mt deep this 12 oz nugget came out to see the sunshine. i thgink this is going to be a great machine well worth the cost. 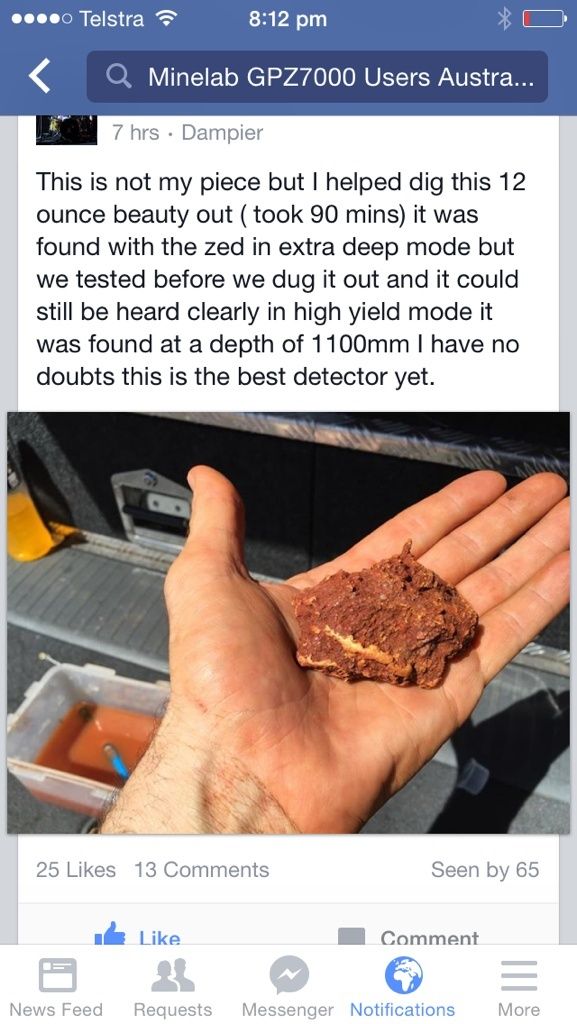 They have got to be happy with that....
Seems the Zed is coming into its own
Might have to save a few more penny's ....

Well done, they would be happy with that, would have paid for the detector in one hit.....

its interesting that of all the good bits so far found with the Zed they all are about the same weight give or take an oz, IE JP 3 nuggets weighed 14oz, 130z, and 12oz now this one at 12oz. is that saying something about a hole or shadow area in the detecting field of the 5k, nice for the Zed owners if it is as there are lots of these sizes out there begging for a 7k to wave over it,

No, I can't believe the depth claims.

What we need is many independent depth comparison tests to judge the Zed's capability.

martinjsto wrote:its interesting that of all the good bits so far found with the Zed they all are about the same weight give or take an oz, IE JP 3 nuggets weighed 14oz, 130z, and 12oz now this one at 12oz. is that saying something about a hole or shadow area in the detecting field of the 5k, nice for the Zed owners if it is as there are lots of these sizes out there begging for a 7k to wave over it,

Be interesting to know the orientation of the nugget in the ground?

Congratulations to the finder and thanks for letting us eye ball this nugget.

Now that's the sort of gold we want to read about being found with the GPZ 7000 and the depth that it is at as well.

Be interesting to know the orientation of the nugget in the ground? Very Happy

Thanks for sharing this great find Martin .

Thanks for sharing, I'm green with envy!!!!!

Great find may you find many more

Very nice! Those guys going to be busy when it gets a bit cooler

Impressive. Now I am getting really jealous.
A 90 minute dig was a big commitment. Good stuff.

I'm starting to change my opinion about this new machine, almost.
It's a pity there is no vision about the dig.
Ask yourselves, why was it that only a Pic was placed on Facebook. Why Facebook ??

I shared this photo with a group that I am a member with on Facebook, and tonight is the first night I have had a chance to get on computer and back to DWAG The target was very quiet but it still clear at the start some thing that I didn't comment on was the fact that we got a ounce and a half piece out of the hole at around the 2 foot mark which at first we thought was the target it was only when we checked the hole that we found that the main signal was still much deeper down than we expected.
the patch is a place that we have previously found a couple good sized bits previously along time ago and had been walked over since with the 4500 and the 5000 with a 18" gold stalker mono it has a iron a quartz deep wash, the orientation of the nugget was as it sits in my hand we had tried to film it on the mobile phone but excitement took over along the way and we don't really have any decent footage of the final stages of the dig
it was found in extra deep with sensitivity at about 14 and audio smoothing off.

so far after our testing with the zed it has been able to punch down to the deep pieces when we can find deep ground and it is a awesome machine in high yield on sub gram pieces at depth our best has been a 0.8 gram @ 9 inches.
So far the problems we have encounted with the Zed are mainly to do with the salt which is pretty much a no go zone and some soils that we have tried are incredibly noisy and hard to get the zed to settle down even with the settings dulled right down, yet when they are walked with my 5000 they can be quiet in comparison, I have also been finding a lot of back pain if i swing it for to long i.e. more than a hr at a time even with the harness ect we are also doing 12 hr days at the moment too so that probably plays a big part, at this stage I feel it's a great compliment to our collection of detectors and each has it's own advantages and dis-advantages.
is it worth $11k well thats for you to decide if it suit's you and your situation.
Hopefully this answers a couple questions.
cheers mick

thanks for the report Mick, the excitement of finding that beauty under the first target would of been overwhelming im sure. well done on a great find and hopefully many more to come.
Martin
_________________
keep safe out there
Martin

Now the question remains..... would the GPZ 7000 pick up on the 12 oz nugget at 1.1 metres, because 2 ft was taken of the top, nevertheless, it was still a great find, shows that there is still good gold to be had...

looks like a good spot to push, let me know if ya need a hand

I did not realise that to go out prospecting these days,it is a prerequisite to have a film crew with you to prove to the doubting Thomases the validity of your finds in order for them to validate the purchase of/capabilities of the GPZ 7000.Mick did not have to prove anything to anyone about that nugget.The ones who are out there quietly going about their business and reaping the rewards with this machine have taken a bit of a punt.Every report about a big deep nugget by them means an opportunity gone begging for those demanding proof, who need to get out there and try for themselves in order to find some gold.

Good to read your report Mick, Thanks. Sounds like your putting in plenty of time and effort, nice to see being rewarded with some great nuggets.
clodhopper,